TheOriginalChatman brings forth a review of the 2018 reboot of the ’70s crime-drama “Superfly.” Read here.

Trevor Jackson breathes new life into a character from a previous era of blaxploitation films. Check out TheOriginalChatman™’s SPOILER-FREE review below.

In the film’s reboot of Superfly, Trevor Jackson (Burning Sands, Grown-ish)  plays Youngblood Priest, a long-time drug dealer desperately looking to get out the life and bring his loved ones with him. In the film’s opening scene, his demeanor is calm, smooth, and calculated. His attitude turns up a notch when he calmly threatens a colleague for money he owes Priest. 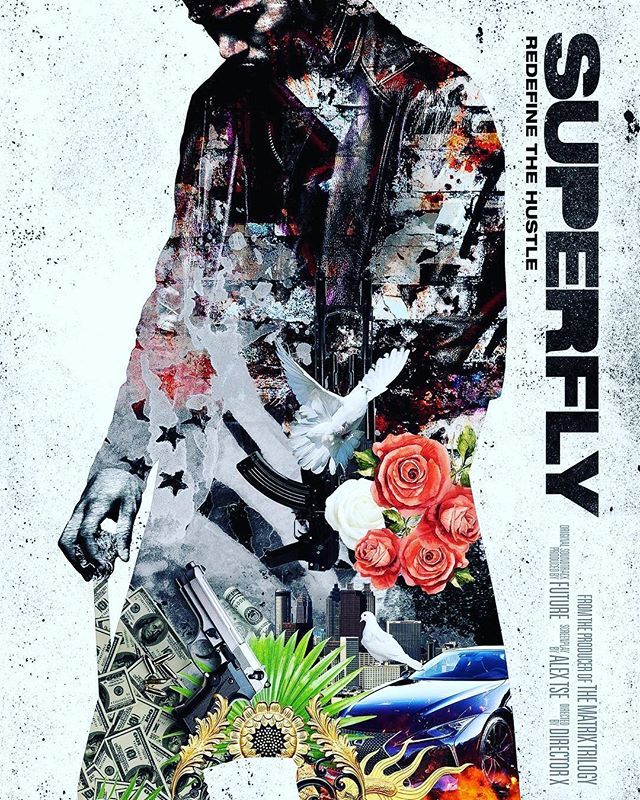 The rest of the film follows Priest and his best friend/partner Eddie (Straight Outta Compton‘s Jason Mitchell) as they attempt to make a clean get-away from their lavish life of hustling—if only it were that easy. They run into jealous rivals wanting to wipe them off the map, dirty cops, and more.

Without the original film’s gritty look and feel (side note: I’ve never experienced the first film, so I’m just making assumptions here!), the glitz and glamour immediately attracts audiences. Furthermore, not much different from superhero films, Superfly offers fantastic hand-to-hand fight sequences mixed with the typical gunfight here and there.

In my opinion, Priest is a good person wishing to turn his life around despite his life’s circumstances. The ultimate connection I’m trying to make here is that Priest illustrates the narrative of a urban legend/anti-hero climbing his way to the top and refusing to be a product of his environment—something much more realistic than heroes and villains battling it out. How much realer can it get than that?

Additionally, crime-dramas typically reach a point of vulnerability when characters express thoughts and feelings reflecting real life dilemmas. At one point in the movie, a scene highlights the societal effects of police brutality in its rawest form, which allows for a true depiction the other characters put on full display.

With the exception of a few predictable plot lines, Director X’s modern take on Superfly is the blockbuster event of the summer you don’t wanna miss! Hit up the comment section and give me your feedback on the film!

Back in April, five-year-old Abriya Ellison was shot by an unknown shooter while playing in her bouncy castle. Although Ellison survived the tragic incident, it left her paralyzed from the waist down. Once hearing of the Georgia native’s story, Big Boi began to reach out to Ellison and her family.

Abriya was gifted with a bulldog puppy that will be trained to be her service dog, courtesy of Big Boi’s Pitfall Kennels.

Despite what happened to her, the rapper took note of Abriya’s positive spirit and energy in an on-camera interview with WSB Atlanta.“She’s been through a lot and to see how strong she is now, that was just like ‘Oh my goodness.’ She’s definitely inspiring and it just touched our heart, so we’re just trying to do what we can do to help.”

Check out video of the interview here.

Although André 3000 has kept us confused as to whether or not he will release a solo album, Big Boi continues to release music at an alarming and extremely entertaining rate.

The other half of legendary rap duo Outkast will release a new album Boomiverse next Friday (June 16). Until then, Big Boi has laced fans with the album art and tracklist also.

The new lead single “Kill Jill” featuring Killer Mike and Jeezy is a certified banger soon as you play it in the whip. Check out the Game of Thrones-themed video below and be sure to cop Boomiverse when it comes out!